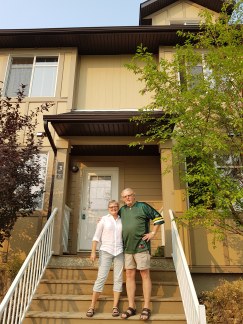 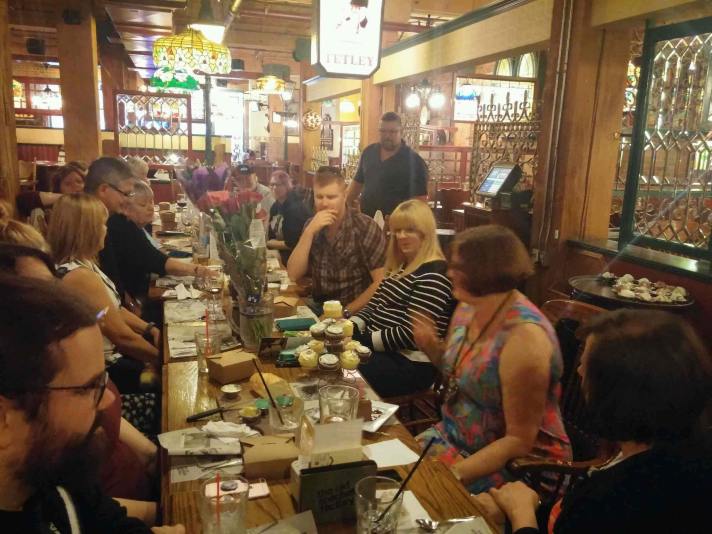 As with everything I do, procrastination plays a HUGE part. I’ve been thinking about finishing this list off and on over the last couple of weeks. Today just might be the day I do it.

51.  Seeing Bruce Springsteen in concert — twice! The first time was a birthday present from Tim. (He always gives the best presents!) I was so excited and didn’t even care that our seats were in the nosebleeds at Coliseum Stadium in Edmonton. When we got there though, we were redirected to the box office where our nose-bleed seats were exchanged for second row seats on the sidelines right next to the stage. I nearly died. Being that close to the Boss and his E Street band was amazing. The second time was a trip to Toronto for his Wrecking Ball tour. 63,000 people in Rogers Stadium, and Tim, me, my sister Lori, her husband Ted and my sister Tracy were part of the magic. I didn’t sit throughout that marathon of a concert and I belted out every song. Have I mentioned that I LOVE Bruce Springsteen?

52.  Teaching myself to crochet. I love handmade things. Anything that someone puts themselves into to create is wonderful in my books. I’m drawn to things like needlepoint, knitting, crochet, sewing — anything tactile. So, years ago I tried knitting and it didn’t go well. I can do a lovely stocking stitch, but that’s about it. When I got pregnant all those years ago I wanted to make a blanket that I could bring our baby home from the hospital in. I turned to crochet. It took me nearly the entire nine months to make it and it was a little lopsided, but I did wrap our son in it for his trip home. That blanket is stored away in a box along with other treasures from Landon’s childhood. Where it, and they will wind up is a mystery. I just like taking them out from time to time and holding them. I unfold that blanket and smile.

53.  Bungee jumping. Another birthday present from Tim. This one was for my 40th birthday. I was petrified when I was standing up there on that tiny platform, but then I told myself “if you can jump out of a plane, you can jump off this” and I did. It was incredible. I highly recommend it.

54.  Learning the hard way that pyramid schemes are nothing but a scam. A friend and I, back in the days when money was a bigger issue than it is now, decided to risk investing in what was a ‘sure thing’. The only thing ‘sure’ about it was that we were going to lose the money we invested. Some things you’ve just got to learn firsthand.

55.  Losing friends and learning that sometimes it just happens. Then realizing that friendships give you so much to be grateful and thankful for, that, even when they are over, they’re still part of who you are.

56.  Sharing my love of theatre with my granddaughter and my love of gardening and cooking with all my grandchildren. The opportunities get fewer each year they grow older, but for the times that I have been able to share with them I hope it’s made an impression.

57.  Being able to go to the last Black Family Reunion in  2017 and having my grandchildren meet all my crazy-wonderful family. We had realized by this time that my dad was terminal and that it would be his last reunion, also it was just after his 80th birthday and a few months before his and mom’s 60th anniversary. There were other milestones celebrated at that reunion as well, and I’m so glad we were there to share in them all.

58.  Eating New York style pizza for the first time at Grimaldi’s under the Brooklyn Bridge. That experience explained to me why I had always loved and revered Gondola pizza from Manitoba! And it has inspired me to try making my own Neapolitan style pizza. It’s a work in progress.

59.  Learning to like myself — it’s been a long, hard road, and there are times when I still don’t like myself that much, but mostly, I think I’m okay. If I could undo all the wrong I’ve done, I would, but then, who would I be?

Okay, so I had a talk with my mother yesterday. We were just chatting — I had sent her some flowers the other day on a whim and she had called to say thank you. We were talking about everything and anything — the dream I’d had about my father a few days earlier, the nightmare I’d had the night before, moving, being bored, a new baby born into the Black clan, etc., etc., etc.

At one point in the conversation she asked me: “So, why aren’t you writing?” I was a little taken aback. Not that she would ask such a question, but because she asked. I really didn’t think anyone paid attention to whether I wrote or not. It’s such a personal thing, and I do so little of it, really, that I figured it was mostly un-noticeable.

Anyway, after I got off the phone I really started thinking about why I don’t write anymore. I know focus is a problem, but that’s simply an excuse. And it occurred to me that I really don’t do much of anything anymore. Since I stopped working. Since I retired.

The other day I wrote a little bit about man’s search for meaning, and for finding purpose in life. Well, I guess my purpose had been working, at any job, for so long that work had become my purpose. Not the satisfaction of any particular skill or achievement, but simply the act of working.

Now, don’t get me wrong, I enjoyed all the jobs I had — except selling encyclopedias — that I was dreadful at, but I know I was good at just about everything else I did, and especially as an education assistant. Then, some things happened in the last year/year and a half at my job that really made me doubt myself and my abilities. Coupled with some big personal family issues I began to spin into depression and became unable to cope.

With the help of a great doctor, some fantastic meds, counseling and support from friends and family I was able to get out from under the feelings of despair, anxiety and depression that had taken hold of my life. I made the decision, for my personal well-being, to not return to work. And, I think that I’ve been unconsciously doubting the ‘rightness’ of that decision for the last little while.

Because I’ve not come to terms with not having a job anymore, I’ve been unable to move forward with anything else — especially writing.

Writing was that thing I always lamented I didn’t have enough time for, because I was always working. And yet — I accomplished more writing when I was working than I have since having all the time in the world to do as much of it as I care to. Crazy, huh?

Last night, while out for a walk, I decided that something needed to change. I thought about how I used to think when I was working, how I used to make plans all the time for what I would do with my free time — my days off, my holidays, my evenings, my weekends.

This morning I got up and I made a plan. For my health and for my personal life. It’s a pretty simple one, but it’s a plan. I’ve given myself small goals to accomplish daily, weekly and monthly. Essentially, I’ve decided to treat retirement as a job. A job that I  control, and that can provide me with as much meaning and purpose as I choose to create.

I am reading Man’s Search for Meaning, by Viktor E. Frankl. My friend, Heather, gave this book to me for my birthday a couple of years ago. I’ve been reading it slowly ever since.

It’s a tough read — not just because of his experience in the concentration camps of Nazi Germany, but because it deals with profound ideas about what ‘meaning of life’ is.

Lately, I’ve been struggling. (When aren’t I, some would say.)  What is the meaning of my life? What is my purpose? These are questions that plague me daily. And so far, I don’t have any answers.

I go about my days with a huge ball of uncertainty in my gut. What, exactly, am I doing with my life? When I look back on it, especially having worked on my Zero to Sixty project — which still isn’t finished — I can see that I’ve done a lot of things, but none of them, with the exception of being a mother, really amount to much. I’ve dabbled but never committed.

Frankl says; “One should not search for an abstract meaning of life. Everyone has his own specific vocation or mission in life to carry out a concrete assignment which demands fulfillment. Therein he cannot be replaced, nor can his life be repeated. Thus, everyone’s task is as unique as is his specific opportunity to implement it.” What, I can’t help asking, is my concrete assignment in life?

Writing has always been a constant in my life, and I’ve had several small successes with it, but is it my purpose? And, if it is, why hasn’t it manifested in a greater way? Is it because I’m lazy or lack confidence or ambition? Is it simply a matter of not being good enough, not possessing the right combination of talent and desire? No, I believe it is because I lack one simple, fundamental and very necessary attribute: the ability to focus.

Why didn’t I become a teacher, a nurse or a professional BlackJack dealer? Why didn’t I pursue one of the many interests I had to completion? When I look at so many of the people I know they have all focused on one aspect of their life — they zeroed in exclusively on one special talent or ability and made that the central focus of their life. Whether it is pottery, waitressing, nursing, driving bus, working in an office, being an administrator, teaching — they all have one thing in common — strong focus.

So, the question is: Can I discover focus at the age of 60, can I cultivate it into something meaningful? Can I, before I die, identify and satisfy my purpose? Can I, as Viktor Frankl advises, “Live as if you were living already for the second time and as if you had acted the first time as wrongly as you are about to act now!”?

I heard some peculiar sounds outside near my balcony yesterday and went to investigate. It was a family of ravens on the neighbouring balcony. Mom and Dad were out with their teenagers — and the young ones, especially one of them was really unsure of him/herself. It was wobbling back and forth on the banister and making the most worried sounds. I stood and watched them for awhile. The young one would sidle up to one of its parents and seem to demand something from them — most likely food, but I thought it was maybe seeking reassurance. Mom and Dad stuck close, but ignored all the whining. Eventually, they coaxed their baby into flying off, but not before there was a lot more complaining and nuzzling and attention seeking.

I wrote the following poem earlier this year and submitted it to a local magazine. It wasn’t selected for publication, and I’ve tweeked it a bit, but seeing that family yesterday prompted me to share it.

They chitter and chatter

Are you all right?

I was going anyway.

There are better places

I want to stay.

Warm on your back?