As with everything I do, procrastination plays a HUGE part. I’ve been thinking about finishing this list off and on over the last couple of weeks. Today just might be the day I do it.

51.  Seeing Bruce Springsteen in concert — twice! The first time was a birthday present from Tim. (He always gives the best presents!) I was so excited and didn’t even care that our seats were in the nosebleeds at Coliseum Stadium in Edmonton. When we got there though, we were redirected to the box office where our nose-bleed seats were exchanged for second row seats on the sidelines right next to the stage. I nearly died. Being that close to the Boss and his E Street band was amazing. The second time was a trip to Toronto for his Wrecking Ball tour. 63,000 people in Rogers Stadium, and Tim, me, my sister Lori, her husband Ted and my sister Tracy were part of the magic. I didn’t sit throughout that marathon of a concert and I belted out every song. Have I mentioned that I LOVE Bruce Springsteen?

52.  Teaching myself to crochet. I love handmade things. Anything that someone puts themselves into to create is wonderful in my books. I’m drawn to things like needlepoint, knitting, crochet, sewing — anything tactile. So, years ago I tried knitting and it didn’t go well. I can do a lovely stocking stitch, but that’s about it. When I got pregnant all those years ago I wanted to make a blanket that I could bring our baby home from the hospital in. I turned to crochet. It took me nearly the entire nine months to make it and it was a little lopsided, but I did wrap our son in it for his trip home. That blanket is stored away in a box along with other treasures from Landon’s childhood. Where it, and they will wind up is a mystery. I just like taking them out from time to time and holding them. I unfold that blanket and smile.

53.  Bungee jumping. Another birthday present from Tim. This one was for my 40th birthday. I was petrified when I was standing up there on that tiny platform, but then I told myself “if you can jump out of a plane, you can jump off this” and I did. It was incredible. I highly recommend it.

54.  Learning the hard way that pyramid schemes are nothing but a scam. A friend and I, back in the days when money was a bigger issue than it is now, decided to risk investing in what was a ‘sure thing’. The only thing ‘sure’ about it was that we were going to lose the money we invested. Some things you’ve just got to learn firsthand.

55.  Losing friends and learning that sometimes it just happens. Then realizing that friendships give you so much to be grateful and thankful for, that, even when they are over, they’re still part of who you are.

56.  Sharing my love of theatre with my granddaughter and my love of gardening and cooking with all my grandchildren. The opportunities get fewer each year they grow older, but for the times that I have been able to share with them I hope it’s made an impression.

57.  Being able to go to the last Black Family Reunion in  2017 and having my grandchildren meet all my crazy-wonderful family. We had realized by this time that my dad was terminal and that it would be his last reunion, also it was just after his 80th birthday and a few months before his and mom’s 60th anniversary. There were other milestones celebrated at that reunion as well, and I’m so glad we were there to share in them all.

58.  Eating New York style pizza for the first time at Grimaldi’s under the Brooklyn Bridge. That experience explained to me why I had always loved and revered Gondola pizza from Manitoba! And it has inspired me to try making my own Neapolitan style pizza. It’s a work in progress.

59.  Learning to like myself — it’s been a long, hard road, and there are times when I still don’t like myself that much, but mostly, I think I’m okay. If I could undo all the wrong I’ve done, I would, but then, who would I be?

It was a busy day today, so my purging was pretty limited.

Today I threw out:

a bunch of tuna cans, and a big tin that once had those rolled up Italian style cookies in it.

The tuna cans were for this project: 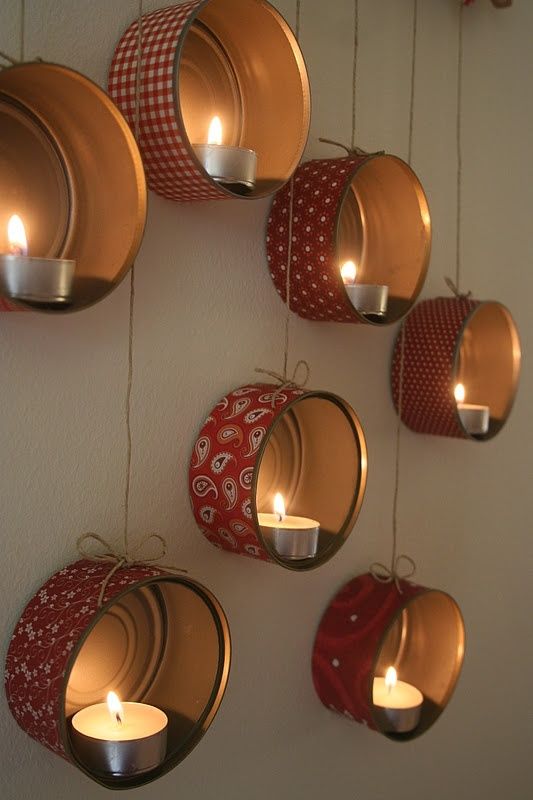 Cute isn’t it? Well I collected those tuna cans about three or four years ago. They were in a basket by my recycling and every so often I’d look at them and think about how I should get started on turning them into these delightful candle holders. Thinking about it was as far as I ever got. So – boom! – into the recycle bin they went. I’ll keep this picture — it’s on one of my Pinterest boards — and who knows? Maybe someday I’ll save me some more tuna cans.

The cookie tin I kept because, well, it was a good-sized tin can with a lid. Perfect for storing all kinds of things. The only thing it managed to store was some dust and a couple of dead spiders. When it hit the tuna cans in the recycle bin I smiled ruefully – ’cause I got another one of those cookie tins upstairs in my pantry. Those Pirouline cookies are so good!